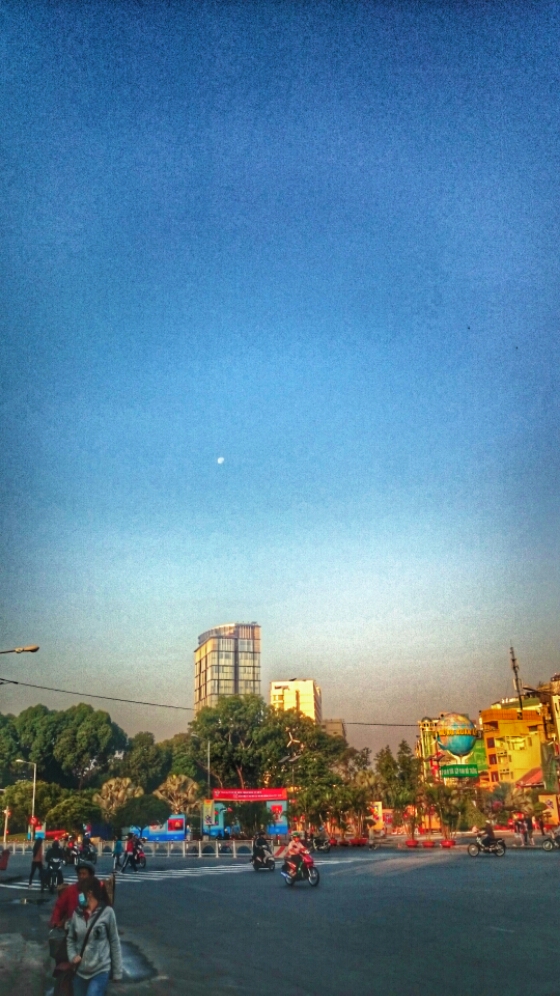 I left my hostel at about 5:30PM in order to catch the last bus to the airport. For some reason, all buses stop at 6AM, making it quite difficult to get around Saigon. At the bus station, near the market, it took me about 15 minutes to figure out that there weren’t any more buses. So reluctantly, I took a motorcycle taxi to the airport. I negotiated a fair price in my opinion of 50,000 Dongs, which was 10x the price of a bus ride.

Naturally, upon arriving at the airport, the driver tried to get more money out of me, but I was quite firm and walked off after I had paid him. I realized too late that I had lost my Sony Smartband. This was turning into an expensive trip. Once at the airport, I changed from my summer clothes into my traveling clothes, because as everyone knows, airports and airplanes are frigid places.

I was able to download The Maze Runner books, and started reading some easy books, compared to Michel Houellebecq and Roberto Bolano. Time went by. My flight only left at 1AM, but I wanted to be at the airport early enough to avoid the foul traffic of Saigon on CNY.

The Cebu Pacific flight was a bit late. It’s a common occurrence with them. I have only had one flight out of six that was on time. I landed in Manila at 4:45AM. My luggage was already on the way to Taipei. I proceeded to the international transfer desk. I wasn’t sure if I had to pay the terminal fee of 550 php. I had read about this online, and it seemed to be a hit and miss. It turns out that if you are transferring internationally within the same day, you will not have to pay it. However, you will have to stay in the lounge until your flight boards. It’s kind of like being in jail. Thankfully, the service was good. They took my money, changed it at the currency exchange, and bought me some McDonald’s for breakfast, and Burger King for lunch.

They also offered me a bed, in the excluded passenger holding area. It was very early in the morning, so there were no excluded passengers there. I took my stuff, and slept for about six hours before waking up. I could hear some people talking about their flight problems in the area and suddenly, I wanted to get out of there. It felt like jail. I left and went back to the lounge, where I met some fellow travelers going to Taipei.

Spending so much time in airports makes you feel weird. I started to develop irritation in my eyes from reading too much on my iPad. We were eventually all freed at 5:30PM and proceeded to go to our departure gate. We managed to get dinner, and then get on the plane at 9:30PM. It was late again, and there seem to be a lot of random gate changes at NAIA. Also, the docking arm never seems to be in place in Manila. We always have to walk out of it, go down stairs, and then go back up some stairs to the airplane. It’s never been on for my flights in Manila. Either they are too lazy, or they don’t know how to do it anymore, or all of the arms are broken. I noticed that this is symptomatic of the Philippines. At one point, there were 20 airport employees outside of the lounge. None of them were working. They were either checking their phones, playing video games, or sleeping.

We landed in Taoyuan a little past midnight, and then took a night time bus to Taipei. I was able to take a bus directly to Banciao. The bus was $130 NT and the taxi ride was $155 NT, including a $40 NT supplement for night time driving and driving on the holiday.

The people I met made the travels worthwhile, even at their worst. I met an old friend that I had known years ago in Saigon. I met new friends in Manila. At the end of the day, no matter how you travel, if you take time to learn about the people you meet, it’s always interesting.